In the Advisory, FinCEN explains that luxury real estate markets are “vulnerable to penetration by foreign and domestic criminal organizations and corrupt actors, especially those misusing otherwise legitimate limited liability companies or other legal entities to shield their identities.”[i] FinCEN is not alone in its concern about beneficial ownership opacity generally and in the context of real estate transactions.

Concerns among U.S. and other G-20 officials and agencies about the use of shell companies to conceal money laundering and related crimes (e.g., corruption, sanctions and tax evasion, narcotics trafficking) have yielded policy and regulatory actions in recent years.[ii] Outside of the United States, proposals have been offered and action has been taken to identify beneficial owners in banking and other transactions. In the United States, steps have been proposed and taken to deprive individual actors of the evasive benefits of corporate opacity. For example, beginning in May 2018, U.S. banks and other “covered financial institutions” will be required to collect, record, and retain beneficial ownership information.[iii]

Real estate, particularly luxury real estate, has not been spared from policy and regulatory scrutiny.[iv] In the United Kingdom, a proposal for a register of foreign legal owners of property and their beneficial owners is advancing.[v] In the United States, FinCEN has not only issued and expanded GTOs, but also has cross-checked (with Bank Secrecy Act (BSA) data) and analyzed GTO-mandated information to gain “greater insight into illicit finance risks in the high-end real estate market.”[vi] Indeed, according to FinCEN, as of May 2, 2017, “over 30 percent of the real estate transactions reported under the GTOs involved a beneficial owner or purchaser representative that had been the subject of unelated Suspicious Activity Reports filed by U.S. financial institutions.”[vii]

As it appears that data collected through GTOs has thus far justified their expansion, it would not be unreasonable to expect additional expansions of FinCEN GTOs (nor would it be entirely surprising for FinCEN to treat, as a regularized or regulatory matter, real estate industry participants functionally as “financial institutions” (to an extent).[viii]

U.S. regulators are not alone in their concerns about the interplay between luxury real estate, money laundering, and other illicit activity. Congress members have also raised concerns. At an April 2017 BSA hearing of the House Financial Services Committee’s Subcommittee on Terrorism and Illicit Finance, one high ranking subcommittee member suggested that “GTOs be extended geographically and temporally, to apply nationwide and permanently.”[ix] Another subcommittee member expressed concerns that requiring reporting only by title insurance companies was insufficient, given the reduced incentive to obtain title insurance in all cash real estate transactions.[x]  Others raised questions as to whether FinCEN’s GTOs (as of April 27, 2017) were sufficiently broad in other respects.[xi]

Given the high level and widespread nature of scrutiny of illicit activity in luxury real estate markets, it seems reasonable to expect FinCEN to, at minimum, continue to employ and expand GTOs in the foreseeable future. The remainder of this Business Update discusses core mechanics of the August GTO.

Because indirect ownership is included, in cases where the legal entity owner is owned by one or more legal entities (directly or indirectly), a Covered Person will be required to search up the chain of ownership until natural persons meeting Beneficial Owner criteria are found. Where ownership structures are multi-layered or otherwise complex, the search for Beneficial Owners can be costly, administratively burdensome and, in some cases, raise red flags that might require further due diligence or weighing of potential risk.

As in the case of information required to verify the Purchaser’s Representative, a Covered Business must obtain and record a copy of the driver’s license, passport, or “other similar identifying documentation” or the Beneficial Owner(s). Such documents, along with others, should be considered part of “all records relating to compliance with” the GTO for the purposes of compliance with its records retention provisions.[xiv]

Covered Transactions—i.e., those subject to the information gathering, reporting, and records retention requirements of the GTO—are all cash residential real estate purchases, for specific minimum amounts and in specific locales, by legal entities such as limited liability companies, partnerships, corporations, and other business entities formed under the laws of a U.S. or non-U.S. jurisdiction. 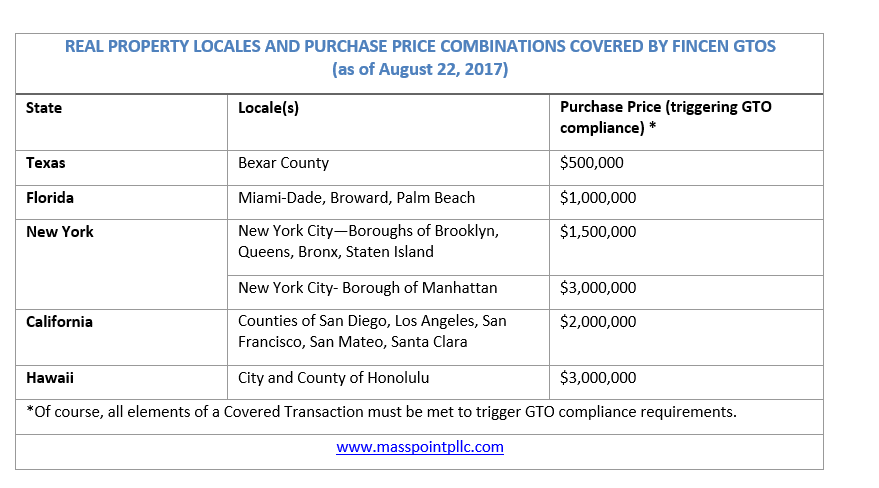 The August GTOs take effect on September 22, 2017 and end on March 20, 2018 (the “Order Period”). For records retention purposes, the implications of the Order Period (which may be extended by future GTO renewals and/or expansions) are that “all records relating to compliance” must be retained for five years from March 20, 2018 (the last day of the GTOs) or a subsequent GTO end date if renewed or extended. The GTO also requires TICs to make such records “available to FinCEN or any other appropriate law enforcement or regulatory agency, upon request.”[xviii]

TICs should ensure that records are compiled and retained in a manner that meets the qualitative and accessibility objectives of the GTO, including that such records be stored in a manner that is “accessible within a reasonable period of time.”[xix]

Civil and Criminal Liability for Noncompliance

Pursuant to the GTO, a Covered Business and “any of its officers, directors, employees, and agents may be liable, without limitation, for civil and criminal penalties for violating any of the terms of this Order.”

[iv] Commercial real estate has also garnered scrutiny, but not formally (yet) in the United States.

[viii] FinCEN has more than once noted that “persons involved in real estate closings and settlements” are “financial institutions” under relevant law, but have not been regulated as such by FinCEN. This and other statements could merely be descriptive of FinCEN’s authority vis-à-vis the real estate industry, or such statements may telegraph FinCEN’s policy or regulatory thinking. Time will tell. See, e.g., Advisory at 1.

[x] Id. at 4. It is worth noting here that title insurance companies often provide real estate settlement services even when no lender’s or owner’s title insurance policy is purchased. Thus, a title insurance company may be involved in an all cash transaction that does not involve the issuance of a title insurance policy. That said, it is accurate (and obvious) that FinCEN’s GTOs are not comprehensive as to, inter alia, transactions and geography. However, there are many ways that the purpose and letter of GTOs can be thwarted—for example, an individual can effectively have the power to obtain beneficial ownership of an entity after a real estate purchase is completed (and reported to FinCEN), such as by holding convertible debt that, at the time of a reportable real estate transaction, has not been converted into equity.